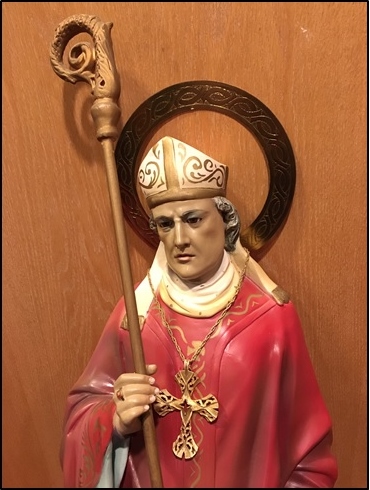 When King Oswald of Bernicia called upon his old educational institution, the great Scottish monastery of Iona, to provide him with a spiritual guide who would help him convert his people to Christianity, the monks asked St. Aidan if he would oblige. Aidan was an Irish bishop, who gave up his see on Scattery Island in order to undertake this prestigious, yet dangerous, appointment.

It must have been late in the year AD 635 when Aidan arrived from Iona. King Oswald, at once, assigned him, as his episcopal see, Lindisfarne (alias Holy Island), off the Northumberland coast, a few miles north of his own rocky fortress of Bamburgh. Here the bishop made his home, to which he loved to retire from time to time, for the sake of private prayer and solitude; but his active work was done on the mainland, where he ever found a ready and willing helper in the King. So the two worked hand-in-hand in the spread of Christianity, much as Edwin and Paulinus had done before them. Bede has given us a graphic sketch of their labours:

“The King, humbly and willingly giving ear to the Bishop’s admonitions, most industriously applied himself to build and extend the Church of Christ in his kingdom; and when the Bishop, who did not perfectly understand the English tongue, preached the Gospel, it was most delightful to see the King himself interpreting the Word of God to his commanders and ministers; for he had perfectly learned the language of the Scots during his long banishment. From that time, many from the region of the Scots came daily into Britain, and with great devotion preached the Word of Faith to those provinces of the English over which King Oswald reigned, and those among them who had received priest’s orders administered to the believers the grace of baptism. Churches were built in several places; the people joyfully flocked together to hear the Word; possessions and lands were given of the King’s bounty to build monasteries; the younger English were, by their Scottish masters, instructed; and there were greater care and attention bestowed upon the rules and observance of regular discipline.”

Well did Aidan understand the value of education and, upon his first coming into the country, he established a school in which he trained up twelve Northumbrian boys, some of whom, in after days, carried on the good work which he had begun: amongst them, the famous St. Chad. So, too, he ever promoted the building of monasteries, the best schools throughout the Middle Ages; and delighted occasionally to spend a few days in quiet with their inmates. Nor was he less earnest in the active work of preaching and pastoral visitation: journeying over hill and dale, generally on foot, he exhorted all he met, “whether rich or poor, if unbelievers, to embrace the mystery of the faith, or, if already Christians, he would strengthen them in the faith and stir them up, by words and actions, to alms and good works. He was accustomed not only to teach the people committed to his charge in church, but also feeling for the weakness of a new-born faith, to wander round the provinces, to go into the houses of the faithful, and to sow the seeds of God’s Word in their hearts, according to the capacity of each.”

Caring nothing for the World or for the things of the World, his own life was a better lesson than any that he could teach by his sermons. In him, men saw one whose only thought was how to serve God himself, and how to win others to him. When not engaged in teaching, he was always to be found employed in prayer and reading the Scriptures; and when forced occasionally to dine at Court with the king, “he went with one or two clergy and, having taken a small repast, made haste to be gone with them, either to read or to pray.” Generous and liberal almost to a fault, “he delighted in distributing to the poor whatever was given him by the kings or rich men of the World.” The generosity of Aidan was imitated by King Oswald, as shown by the famous story of his incorruptible arm, but his successor in Deira, Oswin, though a close friend of Aidan, was not so spontaneously charitable. It is said that Aidan’s lavish generosity was such that on one occasion when King Oswin had given him a particularly fine horse for his own use, a poor man met him and asked for alms, upon which he immediately dismounted, and ordered the horse, with all his Royal trappings, to be given to the beggar. Perhaps it was only natural that the King should be somewhat annoyed at the prompt way in which his gift was disposed of, but Aidan pointed out to him, “that man, made in the image of God, was of more value than his fine horse,” and Oswin threw himself at his feet exclaiming, “that he would never again grudge anything to the children of God.”

Aidan did not long survive King Oswin who was murdered on the orders of King Oswiu of Bernicia. Twelve days afterwards, probably whilst visiting the Royal Court at Bamburgh in order to denounce the latter’s actions, Aidan was seized with a sudden illness. He preferred to stay at the parish church, a little way in land and here a tent was pitched to shelter him, against the west wall of the church. There he died on 31st August AD 651, with his head leaning against a post that served as a buttress. The church was twice burnt in after days, but each time this post escaped the fire – a fact that was naturally set down as miraculous. Consequently, chips of the post were reputed efficacious for the cure of diseases. His body was buried at Lindisfarne, but was partly transferred to Iona by Bishop Colman upon his resignation in AD 664. Other relics apparently survived until the Viking destructions of AD 793, after which they were recovered from the cathedral-priory ruins and eventually moved to Glastonbury Abbey in Somerset.

Bede, who did not agree with Aidan in all things, particularly in the timing of the Celtic Easter celebrations, has borne willing and ungrudging testimony to his saintly life and concludes his account with an admirable passage:

“I have written thus much of the person and works of the aforesaid man, in no way commending or approving what he imperfectly understood in relation to the observance of Easter; nay, very much disliking the same, as I have clearly shown in another book; but, like an impartial historian, simply relating what was done by or through him, and commending such things as are praiseworthy in his actions and preserving the memory thereof, for the benefit of my readers: namely, his love of peace and charity; his chastity and humility; his mind superior to anger and avarice, and despising pride and vain glory; his industry in keeping and teaching the heavenly commandments; his diligence in reading and watching; his authority becoming a priest in reproving the haughty and powerful, and, at the same time, his tenderness in comforting the afflicted and relieving and defending the poor. To say all, in a few words, as near as I could be, informed by those who knew him, he took care to omit none of all those things which he found enjoined in the apostolic or prophetic writings, but to the utmost of his power endeavoured to perform them all in his actions.”

What is a Patron Saint?

Patron saints are chosen as special protectors or guardians over areas of life. These areas can include occupations, illnesses, churches, countries, causes — anything that is important to us. The earliest records show that people and churches were named after apostles and martyrs as early as the fourth century.

Recently, the popes have named patron saints but patrons can be chosen by other individuals or groups as well. Patron saints are often chosen today because an interest, talent, or event in their lives overlaps with the special area.

who called your servant Aidan from the peace of a cloister to re-establish the Christian mission in northern England,

and gave him the gifts of gentleness, simplicity, and strength:

Grant that we, following his example,

may use what you have given us for the relief of human need,

and may persevere in commending the saving Gospel of our Redeemer Jesus Christ;

who lives and reigns with you and the Holy Spirit,

one God, for ever and ever.